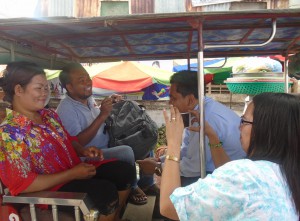 IDEA & NCTU members meet in a tuk-tuk in Phnom Penh

The NCTU – IDEA Exchange Visit took place from 1st – 6th August 2015. The visit brought a delegation of five NCTU members to Phnom Penh, Cambodia, to meet with members, leaders and staff of the informal worker union, “Independent Democracy of Informal Economy Association” (IDEA). The visit was organised as part of the NCTU’s mentoring programme in Southeast Asia, which aims to cultivate a working relationship between NCTU and IDEA, in order to develop IDEA’s capacity to organise and represent informal economy transport workers.

The visit was the second in a series of exchange visits between the two unions, with an initial visit of an IDEA delegation to the Philippines having taken place in June 2015.