NEPAL: “E-rickshaw – Not the cause of , But the solution to Pollution” – report on e-rickshaw organising now available 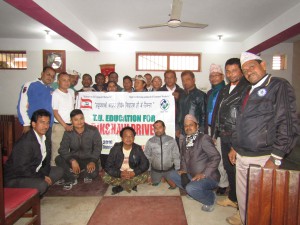 “E-rikshaw – Not the cause of , But the solution to Pollution ” is the slogan of the recently formed Nepal E-rikshaw Drivers Union, which is affiliated one of Nepal’s national transport unions – NETWON.

A report is now available to download documenting the progress of NETWON’s organising of e-rickshaw drivers in Nepal, and in particular about a trade union education programme that was run by NETWON in the east of the country as part of their work with the ITF Informal Transport Workers’ Project.

The report documents how e-rickshaw drivers are facing similar problems throughout the country, for example a lack of parking facilities and the absence of clear government policies regarding e-rickshaws.

The report also includes interviews with e-rickshaw drivers, including two women drivers – Ram Maya Rai & Prabha Timsina – who enjoy their jobs but highlight the problem of harassment for women if they chose to work in the evenings.