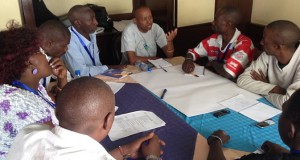 Transport union officials from Kenya, Uganda, and Tanzania at an ITF meeting in Nairobi.

Transport union officials from Kenya, Uganda, and Tanzania at a meeting in Nairobi (organised by the ITF Informal Transport Workers Project) have welcomed newspaper reports that the Kenyan National Police Service Commission (NPSC) will crack down on police harassment and corruption in matatu (minivan) public transport.

They also welcomed proposals to ban traffic police from owning matatus because the practice is a conflict of interest and a source of harassment for operators and workers.

Union members are urged to give evidence of wrongful arrests, detention of vehicles and police bribery to their unions for submission to the NPSC before 12,000 officers are vetted by the authorities from 12 March.

The meeting, from 23-25 February, was part of the ITF’s wider work to fight job insecurity and organise informal workers, who tend to have less pay, lower safety standards and jobs that can be terminated without notice. Reflecting the growth of unions in East Africa’s informal transport industry, it was attended by representatives of the Matatu Workers Union (MWU) and the Public Transport Operators Union (PUTON) in Kenya, along with their counterparts from Tanzania and Uganda.

The unions held talks with the National Transport and Safety Authority (NTSA) to establish a permanent platform for consultation with workers’ representatives in the matatu industry. Workers want NTSA regulations to be rigorously enforced, particularly those requiring formal employment contracts for drivers and conductors and an eight-hour limit on working hours.

ITF Africa regional secretary Joseph Katende said: “The root cause of harassment and corruption, lack of safety, and poor working conditions in the matatu industry is the failure of the authorities to enforce their own regulations, and the absence of labour rights.”

The unions agreed to intensify joint efforts to eradicate violence against women workers and passengers in the matatu industry, and to ensure that informal transport workers were represented in the planning and delivery of the Bus Rapid Transit (BRT) systems in the region, in order to avoid tensions between workers, including violence and threats.

Participants also shared their concerns about Uber. There have been a number of reported threats and attacks against Nairobi Uber drivers in recent weeks.

A version of this article was originally published on the ITF Global website on 4 March 2016.