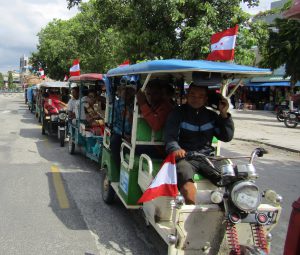 E-Rickshaw drivers attend a rally in the run-up to the union’s founding convention.

On July 14th 2016 the founding convention of the E-Rickshaw Driver Union was successfully held in Damak City, Nepal.

The new E-Rickshaw Driver Union has been established with the support of NETWON – one of two ITF Informal Transport Worker “mentor unions” based in Nepal. The union is currently running in Nepal’s 22 districts and has already formed 13 district committees.

The President of the newly formed National Committee, Binod Regmi, said that his team, with the support of NETWON, was committed to tackling the problems faced by E-Rickshaw drivers across the country.

Commenting on the formation of the new E-Rickshaw union, Alana Dave from the ITF said:

“Organising e-rickshaw drivers is a wonderful achievement by NETWON. We know that the drivers, men and women, face many problems and challenges. Now they have a collective voice in the union. Together they can struggle with other workers who are members of NETWON. The ITF welcomes the e-rickshaw drivers to our global family.”

See previous posts about the development of the new E-Rickshaw Driver Union here:

NEPAL: “E-rickshaw – Not the cause of , But the solution to Pollution” – report on e-rickshaw organising now available