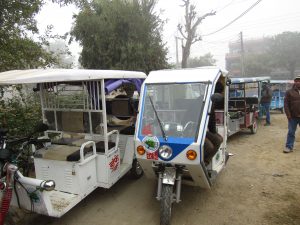 On May 4th the newly formed Nepal E-Rickshaw Driver Union was officially registered as a NEWTON-affiliate by the government of Nepal. The new union is the first e-rickshaw (electronic rickshaw) union to be registered by the government and is due to hold its founding congress in the coming weeks.

Supported by the ITF Informal Transport Workers Project, NETWON has been working hard to organise previously unorganised e-Rickshaw drivers – some of whom are women – into a union over the past three years.

The Nepal e-Rickshaw Driver Union now has over 1000 members divided between 13 regional committees across Nepal, and is expected to grow substantially in the coming months.

NETWON President Ajay Kumar Rai said that the NETWON family were “extremely happy” to receive the registration certificate from the government, and thanked all those who have been supportive of the organising process so far.

Note: E-rickshaws (electric-rickshaws, also known as “city safaris”) are three-wheeled battery-powered vehicles which mainly operate in city and plane areas of Nepal. Less powerful and smaller than the 3-wheeled “Tempos” which are a common site in the Kathmandu valley area, e-rickshaws have become popular in recent years as a replacement for older style cycle-powered rickshaws.