NEPAL: NETWON organises e-rickshaw drivers into a union for the first time 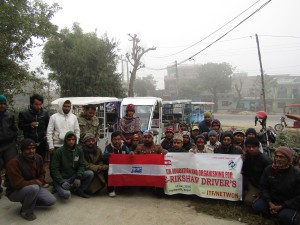 NETWON has now recruited around 1,100 new e-rickshaw members to the union and is in the process of registering a NETWON-affiliated e-rickshaw drivers’ association with the Department of Transport.

NETWON President, Ajay Kumar Rai, says that the new e-rickshaw members understand that they must become “unified” and “build a union” in order to address the problems they are collectively faced with, which include a lack of recognition for e-rickshaws as “public vehicles” by the government, which in turn fuels police harassment, and a lack of available parking space in cities.

Note: E-rickshaws (electric-rickshaws, also known as “city safaris”) are three-wheeled battery-powered vehicles which mainly operate in city and plane areas of Nepal. Less powerful and smaller than the 3-wheeled “Tempos” which are a common site in the Kathmandu valley area, e-rickshaws have become popular in recent years as a replacement for older style cycle-powered rickshaws.