Today (October 5th) mentor unions for the ITF Informal Transport Workers’ project are celebrating Climate Action day as part of the 2015 ITF Action Week. Members of transport unions across the world are using this opportunity to undertake activities which highlight the need to improve and expand public transport to reduce emissions.

In Uganda, ATGWU has launched its climate change policy and has given copies of the policy to its members to help them engage in “green bargaining” with their employers/bargaining counterparts.

In the Philippines, the NCTU has picketed a government body – the Land Transport Franchising Regulatory Board (LTFRB) – to demand the inclusion of information about climate change and the contribution of transport to carbon emissions in the recently introduced mandatory educational training scheme for drivers of public utility vehicles in the Philippines. Neogitations were successful and discussions on climate change will now be included in the training scheme.

Finally, in Nepal, NETWON has been taking part in the ITF’s “5 reasons, 5 photos challenge“, by getting members to talk to passengers in bus stations, airports and taxi ranks about the importance of shifting to public transport. 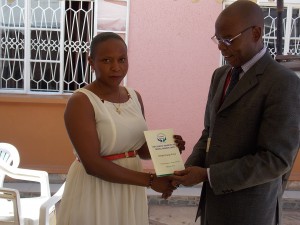 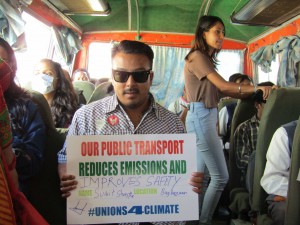